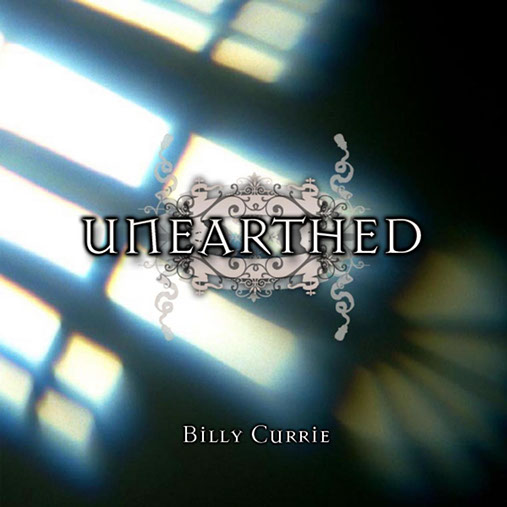 6. Running Through The Years

Unlike the other two previous albums this one was entirely scored out. My feeling and direction where that I really wanted to get to the actual notes of a composition, keeping the sounds to orchestral, with synthesisers to offset things.

The piano found its way in but there is still a minimum amount of sounds being used. The orchestra is such a fantastic palette that I never felt confined.

In 1998 I performed Unearthed at the Royal Geographical Society in London. Two concerts with a string orchestra. I had an extra keyboard player for woodwind, percussion and brass sounds. I conducted and played piano. I had a light show projected above the band that consisted of pictures taken from the archives of the R.G.S. with live footage of the band.

was the first track I wrote, you can tell by the way I lunge in like an over excited kid, creating huge and dramatic sections. I played violin & viola in the college orchestra (a long time ago) and because of my experience and understanding of the various string sections, I was able to go right to the opposite side of the spectrum for the second piece in the work.

This piece is quietly confident with muted strings chugging away and a simple relaxed piano melody. The form is like a song.

was written in the middle period of the album where I felt like I was at the highest point of the creative process! I was confident with my new tools of work. It was also midsummer. I love the sax, and the rhythmic parts gave a humorous quality to the track (pulling the beat around). The beginning is like a pop song until the strings enter with a romantic melody that I tried to use in Ultravox, (at the "He's a Liquid", "Touch and go" and "Mr. X" time - late 1978) but it did not get finished! A folky string melody comes in later and works with it. This melody was a computer happy accident, notes played in one at a time, not the thing I would come up with sat at the piano. The harmony is a lot to do with the Bradford born composer Delius, this is where the title Transparent came from: - Light shining through! I very much admire the man. There is a reprise of Transportation in the piano solo which you may notice.

This was written second from the last and in the Fall. I wanted to get the music straight out of my head and on to the score page. I don't remember ever getting near the keyboard. This track is very classical influenced and has touches of the Brahms "Tragic Overture" about it. I have a fond memory of playing the Tragic overture in Harrogate (Yorkshire, England) when I was at music college. The textural middle section has a Mellotron sound sustained through it. Again I used little bits of synth to unsettle things. I started this track the morning Princess Di died. I came to my studio in Notting Hill Gate (more Ladbroke Grove but close to Kensington Palace) and the whole place had such a numb and depressed atmosphere. I found myself working alone in this huge warehouse on Sunday. I started to exorcise the whole sensation out! All quite intense and strange. Read into the title what you want!

I was reading Jean Cocteau's diaries. He was in the Greek Islands travelling around and he used the phrase Polished by Bare Feet to describe the state of the entrances to the old Greek ruins. I loved it!

Running Through The Years

I enjoyed playing this live. An intense track resolving at the end to a soaringly high melody! Working deeply within the "Logic" computer programme I created some spacey rhythmic music of a textural & experimental nature.

This is a simple piece moving continuously from happy to sad. The repetitive synth rhythm moves the piece deliberately towards Kraut - Rock. The string melody in the sad (minor) section is like a synth solo from my ARP ODYSSEY synth days with ULTRAVOX.

Why a title like this? Who Knows! Strange intuition maybe! I think the title may have come from the spaced out feeling this track can give. The percussion, bass guitar and strings move so fast that it becomes mesmeric. At the gigs I chose this piece to make long improvised Viola solos in the quiet breakdown sections. This was done over the low G of the cellos (like the beginning) or the high minor 7th of the Violins. I worked on bringing out quite loud harmonics not too dissimilar to feedback Guitar!

This is about grabbing the creative energy and bringing it under control and to a conclusion. There is a pure joyous & joky section just before the slow down into the anthemic end. (sorry about the Jimmy Hendrix bass riff but I had just been to see Nigel Kennedy do his Hendrix concert) I love these uplifting, warm, glad to be back home, endings.