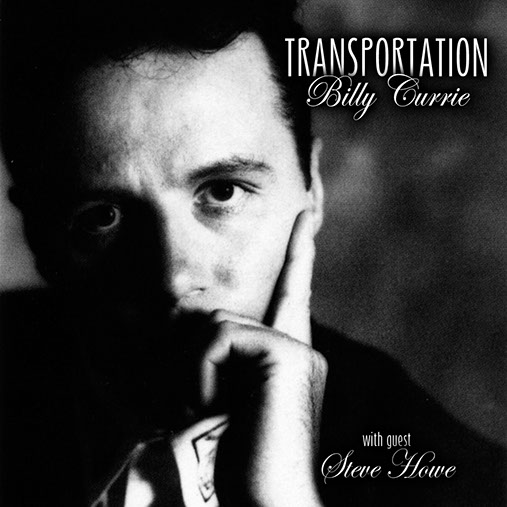 All tracks written by Billy Currie except

This is my first solo album and was a fantastic experience! I had overseen the building of my own studio in the converted basement flat of my house in Notting Hill Gate and was ready to now do my own thing. I didn't just rush into it, because I felt I first needed to make music with some musicians who had a different angle on things (this was in 1987 when Ultravox had just disintegrated). I wrote and recorded three songs (I will release this stuff later on an album of unreleased music from that period) with the keyboard player Toby Anderson and percussionist Kadir Guirey.

Toby worked in the band Curiosity Killed the Cat and both worked in Funkapoliton. One of the songs had vocals by Helena Ferrari, (she later sang on Traveller from my solo album) another of the songs called HOUSE, which was as it says - House Music (the new thing in 1987). This was dance music moving very fast and repetitive. The second song was called High Concentration - a very happy, funky song with Helena on vocals. The two differing keyboard styles and harmonic leanings of Toby's and mine began to start working well together. The third song was a very bluesy song called God Damn It's True sung by a guy called David Ogilvy.

As well as being emotional and soulful it had a chorus that made you want to tune - in and sing along. Again the combination of mine and Toby's keyboard playing and Kadirs percussion really made an interesting fusion, Romantic Funk YEAH!!!!!

I need to inform you of this preparatory stage so you can see how the tracks like Perfect Flight, Traveller, Over-Soul, from my album, came into being. Tekapo Blue, one of the tracks that Toby and I did together, did not end up on the album. Listening to it now, I really do not know why.

This was the first track I started work on. The form is like a roller coaster ride. Climbing up at the beginning, with the feeling of expectancy becoming more intense, (my sampled sax solo has nuances of blues) then WHHOOOOOSH you're off! The ethnic - type rhythm speeds it along. On this album I used Hans Zimmer's Fairlight synthesiser and his engineer, so it seemed only natural, as Hans was a friend, to play it to him. He gave me some good feed-back! (Hans was moving nearer to his big break in films and played me this amazing orchestral track he had just completed). The main melody section always felt a bit lightweight and it wasn't until I met Steve Howe again (I had done some studio tracks with him in 1983, soon to be released) that I got it sorted with a grainy Stratocaster sound playing majestic chords (Very Ultravox). My studio was full of keyboards - PPG, Oberheim, Oscar, Prophets, Wave Station, Roland D50, Akai sampler (12 bit), racks of DX7's etc. sometimes Midied in a chain and run from the first Steinburgh music computer programme. This was 1987 and the bloody computers crashed all the time!

When Steve came down to work with me he had about thirty guitars. Brilliant! We could hardly fit in the studio. Someone said that The 80's where a time of excess - really?

I had the spacy melody for this, and the groove. Steve came up with the middle section - Crazy Classical sounding. Helena's vocals are luvlie.

The working title for this was "A Hoofers Way to Heaven". Hoofer is the American word for Tap Dancer. (In case you did not know) The rhythm, in the middle, is made up from a real live tap dancer that I sampled in the studio. The stone tiles made a great sound when he danced! I had the form completely laid down, then I asked Steve to play over sections. We had a great time choosing which guitar to use.

I have a fantastic memory of the Steel Guitar banked in whole tones and then getting them to flip over. (The top note going to the bottom and the low note going to the top etc.) This is hard to describe; you will hear it for yourself. I was listening to George Gershwin at the time and the influence on my piano playing is clear! Debussy was an influence as well.

(Mountains to Seas). This track was very demanding, harmonically and structurally. It is a set of four variations with a bridge section between each one. Everything develops in size as it moves along. The title comes from the idea of snow dropping (very light piano beginning) onto the mountains, (the southern Alps) then eventually coming down across the (Canterbury plains) plains in huge overflowing rivers and out to sea! Rakaia River is in the south island of New Zealand, a place I travelled to while making this album.

The first two variations, on the melody, are a Classical and Jazz mixture. Gershwin and Debussy are an influence here. The third is very intense, filmic and emotional, with a funky groove overflowing into the fourth variation where the rhythm changes to a laughing triplet beat. This is a crazy, celebratory, "Sergeant Peppers" (complete with sound effects) type ending. The bridge section is like an electronic version of NEU (the early seventies German band that the producer Conny Plank turned me on to). Simple - but hits the spot.

In 1985 (when I built my studio) I put a band together called "World Service". Ray McVEIGH (a guitarist who lived round the corner) introduced me to Derek Forbes of "Simple Minds". Ray had just finished with "The Professionals", Paul Cook and Steve Jones (from the "Sex Pistols") and Derek had just left "Simple Minds". Ray Weston, who I later worked with in "Humania" joined on drums. We actually started making an album in my studio but the Ultravox album "Uvox" interrupted that! The guys wanted me to quit Ultravox and go with "World Service". It was obvious that Ultravox was already in a mess, but my heart still lay with it even so! It was an intriguing sound we made and a privilege to work with the man who made "Simple Minds" sound so cool. My whispering voice sample at the beginning was the PPG Waveterm (8-bit sample). The Oscar solo (at the beginning) is midied with a Prophet 900 sitar sample. The end riff is very PPG.

Perfect Flight
This track is where the Toby, Kadir and me combination really works. I solo over a very spacy, soulful, sexy intro and then a funky drum rhythm smashes in, bringing a simple, happy melody with additional Spanish Guitar from Steve. This track gets continuous airplay in America even though it is just a small amount. A D.J. out there really loves this track.

Steve Howe, Toby Anderson and me getting on down yeeaaahhhhh!!!!!!!!! OooooWwwwww

I actually got my bloody Viola out for this one!

Complete with whistles and harmonics. Steve plays sustained notes on a black Gibson Les Paul (sounding a bit Robert Fripp) over my Holst stile pizzicato Fairlight stings. A very Anglophide ending with Steve on acoustic guitar. I put a strong feeling of that weird band "The Penguin Cafe Orchestra" in this. I heard one of their records for the first time and I was totally knocked out by their originality and good vibes! So much so that I couldn't get them out of my head. I am always interested in music that blurs the line between Classical and Rock, Dance, Jazz etc. That's what I am doing. I had a fairly strong classical upbringing but it doesn't stop me from having freedom to move around. I put classical influences into Ultravox; mixed with the other guys it became something new and different.

This album was very technology oriented and, in retrospect, a bit over the top! But I think it is a very positive album; reaching out, very full and extrovert. Enjoy!