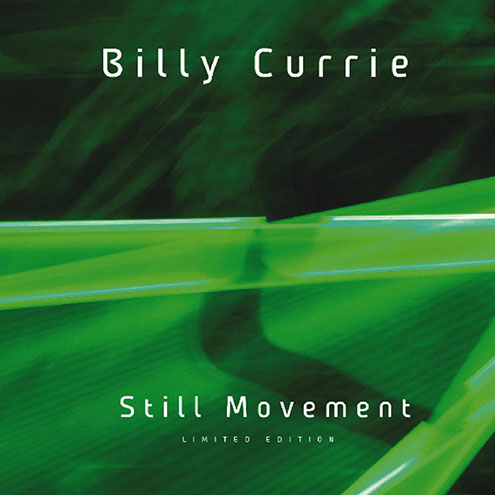 Billy Currie is well known for his contribution to the group Ultravox and the studio project Visage playing Keyboards and Violin.

Billy first started playing keyboards at the Huddersfield Music College back in 1965. Piano was his second instrument. He was there to train to become an orchestral Viola player but things did not quite work out like that!

Piano became a very interesting tool for him as a way to hear the harmony he had to compose for lessons and a means to see fully what was going on while reading scores. All the notes were there on the keyboard! Billy was a natural string player but loved this elevated view of music the piano gave him. He was impressed by the classical electronic composers of the recent times like Varese and Honegger but also liked the more spacey contemporary music from new composer Terry Riley, especially “Rainbow in Curved Air”. His music had a very spacey organ sound that was a bit like a current sparkly synthesiser version of an organ sound.

Billy managed to secure a place at the London Royal Academy of Music in 1969 to take his next step to becoming an orchestral player but took a sharp left turn. He was invited into a band and grabbed the opportunity. This band, based in London, called Springbirth then Company Roadshow had a strong leaning towards blues and Jazz but with a rock edge. The drummer had played with The Graham Bond Organisation. Improvisation was the way. Billy played Electric Viola and six string bass guitar with a line-up of Vocals, Guitar, Sax, Drums and Hammond B3. The Hammond was an amazing instrument for Billy to experiment with when the band were not around. He loved the way Pink Floyd used it as well as Jimmy Smith. The boffin roadie for the band used to look after Hawkwind's strange oscillator synth so Billy got the chance to sit in his workshop playing with this weird synth all night.

Billy left this band after a year and worked with the Tim Buckley styled song smith Jeff Starrs who later, after Billy moved on, did two albums for Virgin with his band Interview. This was a time when Billy, playing piano, started writing very emotive songs, with Jeff on vocals. They had a few big gigs supporting The Strawbs so Billy experienced the serious thrill of playing a grand piano up on stage. It was at this time that Billy worked with the amazing Mellotron. It belonged to the the Strawbs. Billy was invited into Pye Studios, London, to produce a young female vocalist and so got a chance to use this instrument, that had great string sounds, on the sessions.

Ultravox was the next band that Billy joined in 1973. Billy was still considered an electric Violin or Viola player first and it took a year for him to move into the position of keyboard player. The first keyboard Billy bought was a bland sounding Crumer Electric piano. This was just good enough for gigs and worked fine for the rehearsal writing process. Billy loved writing using the keyboard as he could see what was going on with the structure and harmony.

Ultravox signed to Island Records in 1976 and went in the studio to record there first album. Billy used the acoustic grand piano, wurlitzer, string machine, organ and clavinet. Bits and pieces really to get the job done. It was the sounds coming from the Mini Moog synthesiser that blew Billy's mind. Brian Eno was co producing with Steve Lillywhite and showed Billy how to get some sounds from this great instrument. Billy co wrote “Slip Away” with John Foxx (Vocal) and the Mini Moog worked very well on this track. It also worked on “My Sex” an experimental track written in the studio.

The Arp Odyssey synthesiser was the choice for Billy. He felt it sounded more raw and emotional. Billy immediately started to experiment and, as well as using the instrument to make electronic rhythms and sometime violent effects, developed his own solo sound. The sound had a vibrato made from the LFO sounding like a very intense Violin. This seemed a natural way to express himself being a Violinist. There is a good example of this solo sound on the Gary Numan live version of “On Broadway” 1979. The Oscar arrived in 1984 and Billy started using this more reliable Synth instead of the Arp. Chris Huggett and Paul Wiffen, the English Guys that made it,  modelled the first preset sound on Billy's Arp lead sound. This solo sound can be heard on the track “Ukraine” from Billy's “Stand Up And Walk” album.

With “Still Movement” Billy has, in his own uniquely creative way, mastered the new Virtual versions of his trademark synths, the Arp Odyssey and the Oscar, to make a very crisp and powerful Synthesiser Album, drawing from his considerable experience.

The new version of the Arp is now called the Oddity and the new version of the Oscar is now the Imposcar. Both have new features for Billy to experiment with, for example polyphonic sounds. Only two notes at a time could be played back in the early days of Ultravox. “The Other World” is a track from “Still Movement” written using a Billy Currie polyphonic sound from the Imposcar. This sound is on the Billy Currie Signature Sounds called High Float. Please use phasing.

One of the other Billy Currie trademark sounds was the huge, almost religious in its intensity, string sounds he created from the magnificent Yamaha CS80. He used this sound on the Ultravox track “Hymn”.

“Standing Still” from “Still Movement” goes into this area using a CS80 sound from the Atmosphere virtual synth.

Billy uses many other synths on this album, as well as the Violin, and has moved forward taking things up a couple of notches from his previous album “Push”. Its a Billy Currie Synthesiser Album.